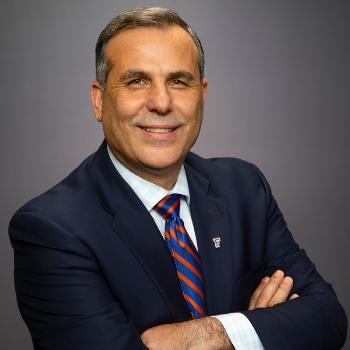 Elias G. Eldayrie has been the Vice President and Chief Information Officer for the University of Florida since 2010. During his tenure, Eldayrie has helped drive UF’s rise as one of the nation’s top-5 public universities and its emerging leadership in artificial intelligence (AI) in higher education. Eldayrie led that effort through modernizing and expanding UF’s complete suite of research, student, and institutional computing systems.

Under Eldayrie’s leadership, UF has created a world-class research computing environment. At its core is HiPerGator, a state-of-the-art artificial intelligence supercomputer created in partnership with NVIDIA. HiPerGator supports more than half of the projects in UF’s $960 million research portfolio. It is the central element of the university’s artificial intelligence initiative to educate the AI workforce of the future -- an initiative that is unique in higher education.

Eldayrie modernized UF’s student computing services, including the teaching and learning services that enable the university’s growing online education programs. He redesigned UF’s IT resources and governance to align with the university’s strategic goal of reaching the top-5 rank of national public universities. Eldayrie has also expanded UF’s IT operation and today oversees a $100+ million budget and more than 500 IT professionals.

In addition to his leadership at UF, Eldayrie oversaw the implementation of one of the first 100-gig ethernet networks in the nation. He led the deployment of one Wi-Fi system at UF locations across Florida’s 67 counties. Eldayrie also serves on the boards of Florida LambdaRail, EDUCAUSE, and Unizin, and in other leadership positions pursuing state and national IT priorities, including information security.

Before arriving at UF, Eldayrie served as the chief information officer at the University at Buffalo, New York’s largest public AAU university, where he spent 23 years. He holds an MBA and a bachelor’s degree in computer science from the University at Buffalo. When not at his desk, Eldayrie enjoys teaching a class in leadership at UF’s Warrington College of Business and joining his family in cheering for the Gators.